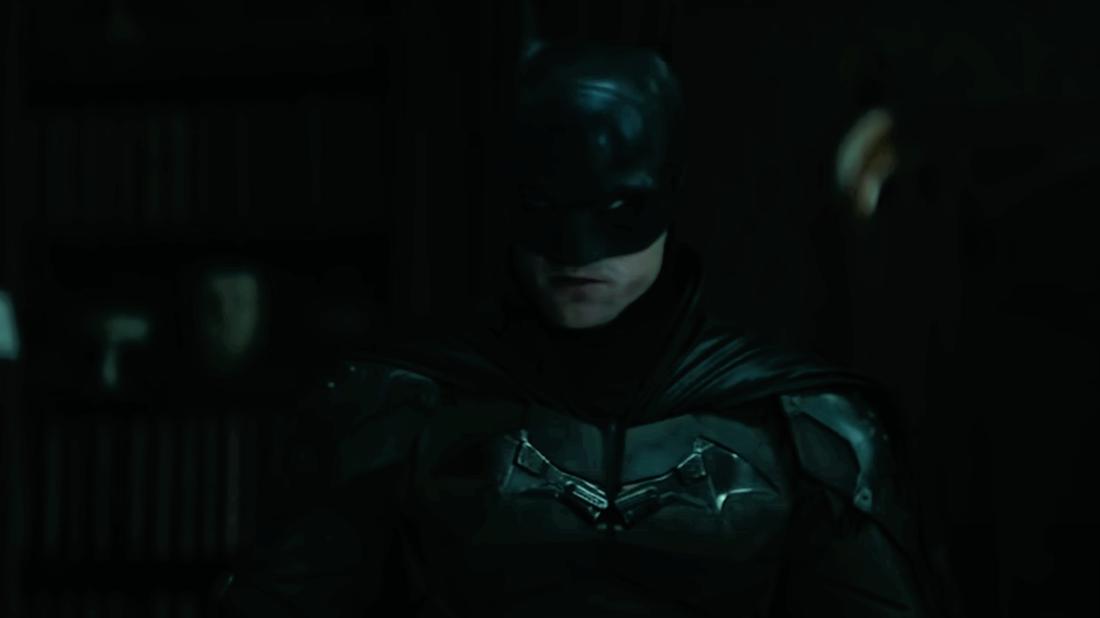 Who Died And Caused A Scene?

A confrontation with the Penguin (played by Colin Farrell), who was accompanied by Catwoman (played by Zoë Kravitz) who seems to be hand in arm (perhaps even hand in glove?) with Gotham mob boss Carmine Falcone (played by John Turturro)…

Fans snapshotted all of them together (RL Location: St. George’s Hall | Liverpool, England) in what looks like a funeral/memorial setting. And of course, Bruce Wayne (played by Robert Pattinson) was in attendance.

Everyone may be dressed for cold weather but things seem to be heating up in Gotham City, and we are not referring to Pattinson’s fever. “The Batman” lead and star recently experienced covid-19 symptoms in early September this year, for which the entire production was forced to shut down as Robert went into self-isolation.

Now that shooting has resumed in earnest, we’re all getting glimpses of scenes that have great potential to steal breaths when the movie actually releases on 4th March 2022. 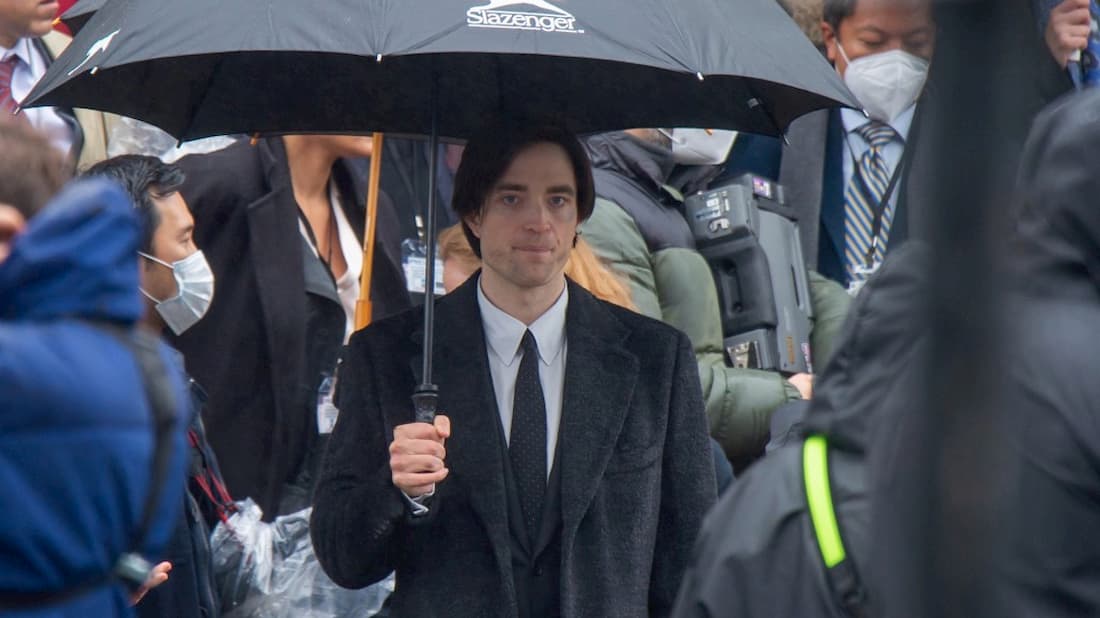 We’re yet to figure out whose funeral everyone is apparently attending. In fact, we got unforgettable shots of this very location in the trailer for “The Batman” that released worldwide in August 2020, via DC FanDome (the sensational online replacement for a ‘Comic-Con International’ that couldn’t happen thanks to the Wuhan virus pandemic).

“Lies, lies, lies”… “Our day of judgment”… Fan set-shots also captured some rather dark and mysterious signs and placards being waved, which hints that the person who perished could well be a controversial yet well-known Gotham figure. 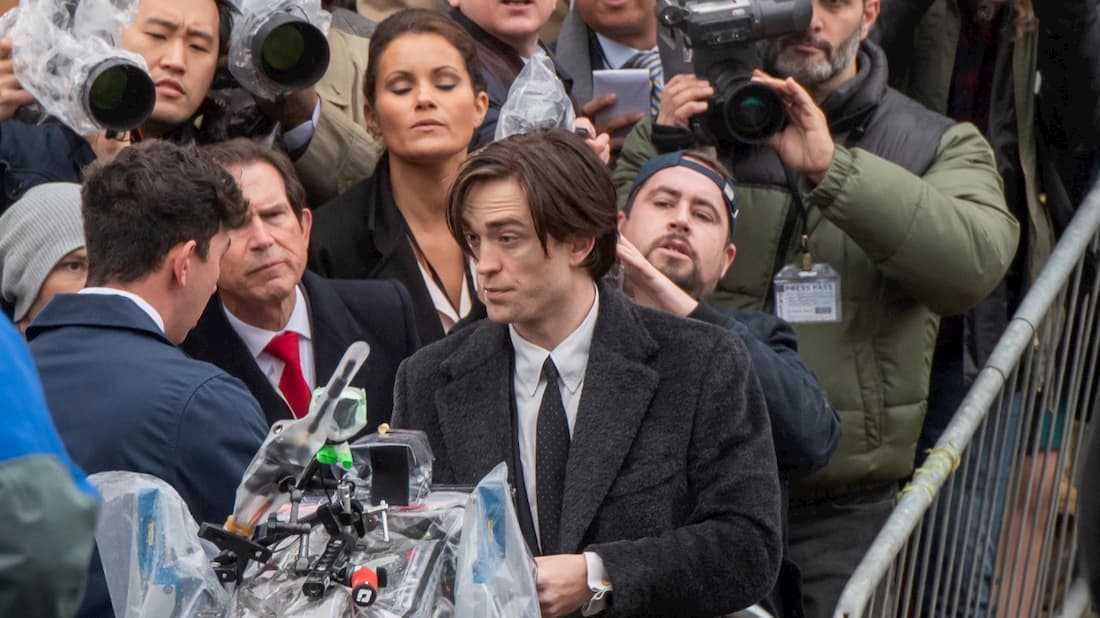 The original release date for “The Batman” may have shifted from 1st October 2021 to 4th March 2022, but the script still holds fast to its dark noir theme à la Matt Reeves. The core plotline centres around Bruce Wayne’s younger days, particularly his early moments spent as the Caped Crusader out for justice in a world that simply refuses to speed it along.

Reeves has confirmed that this Bat-tale will be a Year-2 story, and a standalone DC film. Meaning, it is not connected to the broader DC universe in any tangible sense. It is neither a prequel nor a sequel to the existing lineup of Batman films, but is rather a distinct storyline that captures a new version of things. Much like Todd Phillips’ “Joker” (2019), starring Joaquin Phoenix as Arthur Fleck (a well-deserved Oscar win, right there).

“The Batman” has promised us a peek into the life of an as-yet-unknown superhero, and the fear and anxiety of Gotham as its citizens reel under the way their city is being run.

“He’s still a growing legend,” said Reeves. “People wonder whether he exists. It’s one of the things he will confront in the story.”

Instead of speculating on how this Bat-story is going to be different from the rest, we felt it best to share Matt Reeves’s own take on Pattinson’s Wayne-crisis and where Reeves found inspiration for the plot.

“A lot of the other stories are about how he mastered his fear to become Batman. What was exciting for me was not that, but to meet him in the middle of this criminological state. For him to make mistakes. Because the movie’s detective story and about corruption, we’re treating it as if this Batman story could have happened. He doesn’t have superpowers, just super focus. Chinatown was a key movie for us. French Connection and Taxi Driver were key for us as well. A lot of ’70s street grounded stories.” 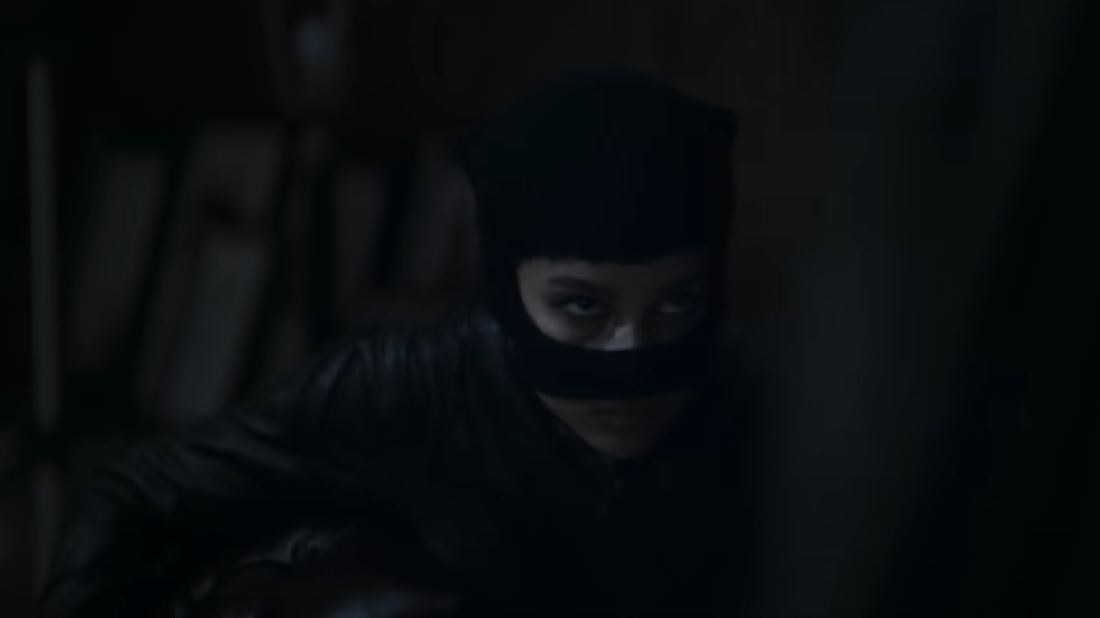 Distancing guidelines aside, about one hundred extras were on set the day these fan-photos were taken and shared online. We’re imagining an enraged Matt Reeves taking his frustration out on a hapless troupe of assistant directors.

Anyway, the talk of the town centers mainly around the three ‘big bads’ who were captured on set. We’re looking at Turturro’s Carmine Falcone and marveling at how well they captured his look from the comics.

We’re also admiring the sheer makeup and prosthetic brilliance of Farrell’s Penguin, who seems to be taunting Bruce Wayne on the stairs of St. George’s Hall (whose actual in-movie location will probably be revealed, um, in the movie).

A short clip has also surfaced, revealing an unfolding scene where people are heading inside to attend a funeral. The video captures Penguin and Wayne in a semi-aggressive light, making us all that much hungrier to watch the movie. 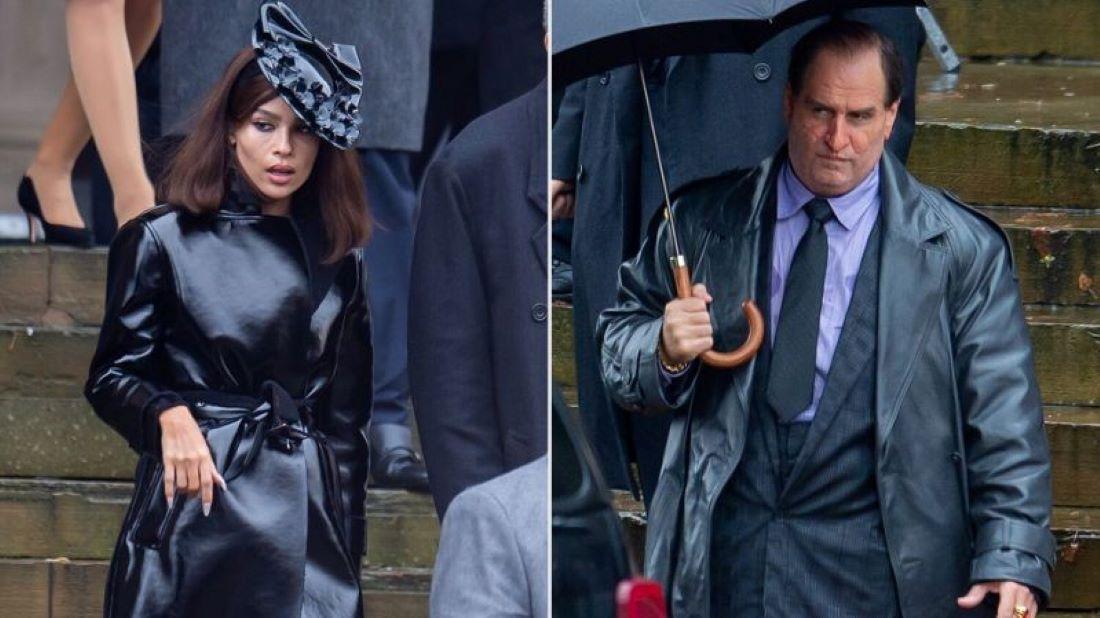 And then we spotted Kravitz as Catwoman, in a glossy leather overcoat and hat to match. Her pose was attitude itself, manifesting feline subtlety and restrained power in ways only Zoë can pull off.

In “Batman 50” (the official DC comic, released 1st January 2018), we were all invited to partake in the wedding between Catwoman and Batman. Wonder if Reeves read that edition and if he has added a little ‘origin romance’ between the two fated lovebirds in “The Batman”.